Before joining the College of Charleston I was on the faculty of the Department of Botany at Stockholm University in Sweden from 1994-1999. I retain the permanent academic title of Docent (Associate Professor) in Sweden. My office and lab were across the street from the Royal Academy of Science, where they select the winners of the Nobel prize.  While in Europe I also worked on sabbatical at the University of Siena in Italy. 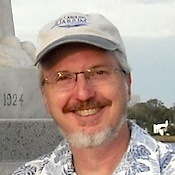